Once upon a time to many Singaporeans (and perhaps now still applicable to some others), the definition of success means the 5Cs: Car, Cash, Condominium, Country Club membership and Credit Card.

To Ms Suzanne Low, a social worker at AWWA School (a school for children from 7- to 18-year-olds with special needs), the definition refers simply to the achievement of each and every small step towards the goal. “Every small step we take forward, I think it’s success. Be it for myself or for my clients.” Before she enrolled in NUS, Ms Low had no idea what social work was about. All she knew was that she had no interest in a desk-bound job; she wanted to be running about and also wanted to be doing humanitarian work. After a lot of praying and thinking, she stumbled on a course about social work so she researched more about it. The more she read, the more she found the sector attractive. Social work comprises a wide field of disciplines, from working with kids to youths, from the elderly to persons with disabilities. It was just right up her alley, and as she puts it, “the best decision I ever made”. She currently holds about 100 cases, with 20 of them being of a high intensity nature and requiring more frequent follow-ups. One striking case she handled revolved around a student who made a mess out of everything when his mother is preparing him for school. The mother became frustrated due to the tight time schedule in getting him to school, and then heading to school, so she tied him to a chair. Through regular follow-ups, Ms Low worked with the mother in better managing the child and how to keep him occupied while she is preparing him for school. 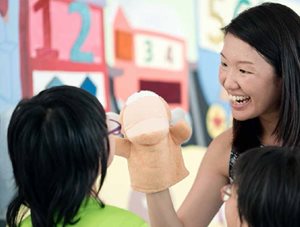 For a new social worker who just stepped into the sector, managing cases can be a little daunting. Ms Low found herself trying to make sense of her work and applying what has been learnt in school to work. Thankfully, there is a 5-day course, The Starting Point: An On-Boarding Programme for Social Workers, which is ideal for social work practitioners who have been in the line between 6 months and 2 years of service. “It is easy to feel stuck in the system after working for a while. This course is like a mini-retreat, allowing you to think through what you’ve been doing, to remove your fears and go back recharged and refreshed.”

Among the benefits of the course, Ms Low points out that it is especially enlightening when policy makers from the various ministries come down to share and explain the rationale behind the work procedures and policies. It sheds a light on the reason she is doing the things she do, and she is now more confident in her work. During the course, the facilitators made them reflect regularly, on what they are doing at work, what they have learned, and things they ought to do differently. So to her, it is like learning what they need to unlearn during these past two years of working.

Like Mr Paul Long whom you read about earlier, Ms Low’s childhood aspiration was also to become a pilot. The thought of flying everywhere in the world, for free, and being able to interact with people from diverse cultures inspired her. But she had more than one dream apparently! She wanted also to be a teacher, a soldier, or even an astronaut, at different points in life. In spite of that, Ms Low is now more than happy to stick to this decision for the next five years (or even longer) – and hopes to remain as an energetic and enthusiastic social worker to help, interact and work alongside those in need.