To Ms Schutz Lee, treasurer for the Society for WINGS (Women’s Initiative for Ageing Successfully), “Just Do It” fully symbolises her motto in life.

In fact, her personality is the embodiment of the quote itself. If she believes she can do it, then onward it is. While others may list out the pros and cons before embarking on a particular endeavour, Ms Lee is actionoriented, preferring to put her foot down, and get things done. Having always been interested in both economic and social issues, Ms Lee took up economics in the university, and later landed her first job as a Business Times reporter. Meanwhile, on the aspect of the social causes, she got to know Ms Kanwaljit Soin, the founding president of WINGS, and was soon roped in as a board member.

Because of her strong financial skills, she became the treasurer, to manage the financial matters of the organisation. At the same time, she is also able to engage her keen interest in social causes, because WINGS proactively looks at providing support for women in their 40s and above. As part of the lifelong process to enhance her capacity as a board member, Ms Lee recently attended the NonProfit Directors programme. Based on up-to-date rules and regulations of running non-profits and other social service agencies, she benefitted tremendously from the programme. The skills she picks up provide her the ways to deal with the various situations she, and the Society, encounter on a regular basis. In fact she had already enthusiastically recommended the course to her peers in other women’s organisations. 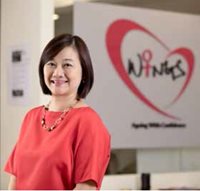 On the biggest change Ms Lee has seen in herself since she joined Society for WINGS: “My role as a WINGS board member allows me to work with different groups of people. I’ve interacted with women who come here for exercises or classes, women whom I’d not have met if I were in a deskbound job. All of them have different experiences to share, and this greatly contributes to my knowledge. I’m now able to connect more, and better, to others, and also to a wider group of people.”

When she is not cracking her head on how to help those in need, Ms Lee is sharply attuned to the modern trends of relaxation. She loves Netflix and shares Spotify music with her children. Since she tends to fall asleep easily while reading, she decides to switch over to audio books, and it has been a suspenseful journey so far, with some memorable titles such as Gone Girl and The Girl on the Train.

On an inspirational figure whom she looks up to, Ms Lee considers her mother as her role model. Her parents divorced when she and her sister were young. Because of that, her mother had to juggle her job as well as take care of them. Now, as a mother herself, Ms Lee can relate more to the difficulties of bringing up children. To her, a single mother would face even more problems and struggles. At this point in time, there are still many economic and social troubles that hinder the progress of a society, besides those that a single mother faces. Much as she values her work at WINGS, Ms Lee hopes to be more involved in other causes. For instance, with the economic downturn running its cycle now, poverty concerns are peaking, together with the rising gap of income inequality. Even though there are many organisations around to address these issues, she wants to be more involved to help these people. If such an opportunity arises, she would definitely be ready to take on the challenge, and just do it.