With feedback from his colleagues that they see him as someone who is so super focused at work, and able to sit at the desk all day long to do his work, Mr Lam Wai Mun still finds himself lacking in some aspects. So, if he could have a super power, he would love the idea of being imbued with super wisdom. Why so?

“A lot of times, when we [Mr Lam and his colleagues] share about our work, we find that we can be easily discouraged when we realise that we’re unable to help our clients, being not able to give them more.” Therefore, the ability of super wisdom would allow him to take heart in the fact that if he ever falls short of his goal or aim of helping his client, he would have the wisdom to see that this is actually all part of a person’s journey.

So that he can pat himself on the shoulder regarding the effort he put in, and to learn from his mistake or failure. As a newly-minted counsellor at Fei Yue Family Service Centre (Champions Way), Mr Lam is another leading ambassador of a successful mid career switch. After graduating with an engineering degree, he found that tinkering with machines was not really his cup of tea, and that he wanted to help people instead. Even though his family advised otherwise, he decided to take the plunge to engage in more meaningful work, beginning with his first job at TOUCH Community Services.

The FSC On-Boarding Training Programme is particularly beneficial to him because it trains him in the code of social work practice. The code provides the system of excellent service to the clients, to ensure that he and his peers meet the needs of the people they serve. Now, he is able to see the big picture, of how he can help his clients in a more holistic way, rather than just addressing their presenting concerns.

Indeed, social service is not an easy vocation. Often there are no tangible rewards. In fact, the people they serve might not even understand their good intentions. Therefore, it is extremely heartwarming when they express their gratitude at the end of the day. 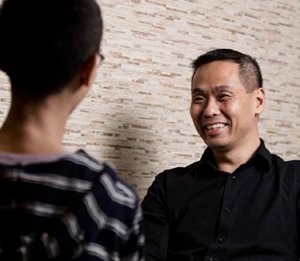 Indeed, social service is not an easy vocation. Often there are no tangible rewards. In fact, the people they serve might not even understand their good intentions. Therefore, it is extremely heartwarming when they express their gratitude at the end of the day. In addition, help is not just only about what one can do for them, but also of the rapport struck up with the clients. Mr Lam shares an anecdote: “I have a particular client who is wheelchairbound due to a stroke about five years ago. When he first came to us, he was asking for financial assistance. We directed him to the right agency to attend to that issue, but I also kept in touch with him to provide emotional support, because he is living alone with his domestic helper. Over time, he started asking, ‘How are you doing at work? Are you OK? Do you feel tired? Did you sleep well?’ It is very therapeutic, because he is concerned for me as a person, and not just because I’m his counsellor. This affirms my decision to go into social service.”

After working with so many families and individuals, the newlywed Mr Lam realises that he is still a work-inprogress, even though he is building better relationships with the people around him, including his wife who is also in the social service sector. That being said, Mr Lam is determined to continue being super focused on his duties, to bring value to himself and the people around him – and hopefully gaining super wisdom along the way.